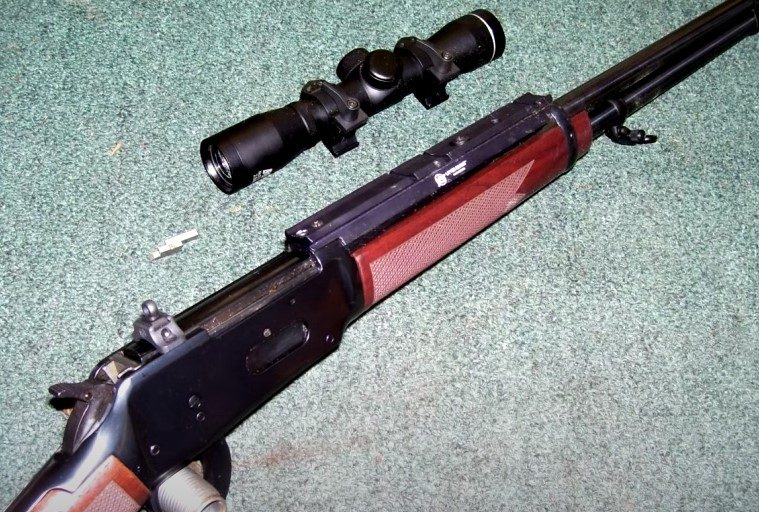 The lever-action rifle has been around since 1854, it’s a uniquely American design and no other country in the world has ever produced one. These guns are handy in the thick brush of the eastern US that are lightweight and you get a very quick fold up shot at any game animal you happen to be hunting.

So how do you improve on such a design. By adding a scout scope the concept of a scout rifle was developed by gun writer Jeff Cooper. The idea is to place a scope mounted forward of the action low on the centerline of the board. You use an intermediate eye relief scope with low magnification. These guns are fired with both eyes open, this configuration is great for hunting in dense woods for game that might be moving. It gives a shooter great peripheral vision of their non scope eye.

I bought a mount made by XS systems just for this purpose and I mounted it on a 30-30 model 94 Winchester. I have three such guns in different calibers myself that I hunt with.

First off you have to disassemble the forward end of the gun. to see how this is done you can refer to the winchester 94 video by gun works because of the varying barrel profiles of winchester 94 is made over the years. The manufacturer recommends you bed this mount with the included epoxy. Unfortunately this makes the mount a permanent fixture on the gun itself.

What I do to ensure that I can remove the mount at a later date if desired. As I coat the barrel with Brownells mold release according to the directions on the package, The winchester 94 is the only gun that requires epoxy bedding. I’m will include a tip that you can sign up for free, then I’ll take you step-by-step with all the details on how this is done here.

In the picture above, you see the mount in place on the gun. I also use a scout scope mount with one quick detachable scope rings. These steel rings will allow you to remove and replace the scope as desired without losing your zero. You’ll also notice on this rifle, there’s an excess systems go string rear sight mounted on the back of the receiver. In close-up or low-light conditions you can easily remove the scope to get access to the sights by placing the sight on the rear of the receiver, you get a longer sight radius and thus a more accurate shot than by having the sight mounted on the conventional location on the barrel itself. This is a great gunnery for hunting the underbrush of the Eastern hunting woods or even for big game in Alaska.

I have this model 94, a model 1895 Marlin guide gun in 45 70 and for those of you who want to fire Spitzer bullets. There’s also the winchester model 95 which I have in 30-06. All of these guns have the scout scope, Ghost Ring Sights combination to other guns that are elaboration to fire spiritual projectiles of the Browning Model 81 and the savage 99. Any of these guns will be an excellent choice for conversion to a scout rifle.

Installation is easy enough with the simple instructions included with the mount and with the tip video . Were you discussed about putting Scout scopes on the lever action rifles?

This is a winchester Model 95 in 30-6 and this is one of the rifles that I use for moose hunting. So we’re going to show you how effective, this thing is got to have ear protection not a 95 Winchester. Unfortunately there’s no company that manufactures any sort of a scout mount for these rifles, so since I’m a gunsmith and have a machine shop ahead to make moon.

This is a model 94 angle of Jack Winchester lever-action rifle in 30-30. I have a scout scope mounted and go string sights for backup. This makes a great little brush robin, so let’s test fire this one too with the Scout scope and I’ll show you how easy it is to remove the scope and go back to the open sides.

For safety purposes we’re going to make sure that your apples empty and not loaded, I’ve got a pair of levers on these court worn quick-detachable rings, all you have to simply do is turn both of those take the scope off and we’ll set it to the side the third rifle that I have is a Marlin 1895 GS it’s a stainless steel guide gun chamber for 4570.

Unfortunately I found it with the quick detach rings, I had to have a third ring reason being is because since I lose my own ammunition. The ammunition that I’m fired in this gun is so strong, it was actually pulling the rings off the top of the Mount. I’ll give you an idea of what I’m talking about the ammunition that I’m firing 535 green cast bullets with copper jet gas, if the idea of putting a scout scope on your lever-action rifle is something that’s interesting ear is intriguing. Then you can go to the website https://barrettrifles.com/ your self, they have the latest gun works article for all your long guns and handguns that includes a high-tech machine shop for tooling obsolete parts old or new.

If you have a farm that needs attention gun works can probably fix it, solve it coat, it and make it work.